Creating a Lineup for Your Entry

You’ve entered a DFS Contest, but if you don’t create a fantasy lineup, you can’t win squat. So get started in creating your lineup today!

Once you have entered a DFS Contest, the next step is to create your lineup of players. Creating a lineup of players will allow you to construct a “team” of players from anywhere in the league that you think will individually play well during games for a specified date/time. Each player in your lineup will earn “points” based on their performance, and those individual player points will then be added up to get a cumulative point total for your team. The contestants with the most points win.

There are a lot of factors you need to take into account when constructing your lineup:

When you initially get to the Create Lineup screen, you will see a list of positions you need to select players for.

For NFL Contests there are 9 positions to fill:

When you’re ready to start filling in positions, simply tap on the position to be taken to the player selection screen: 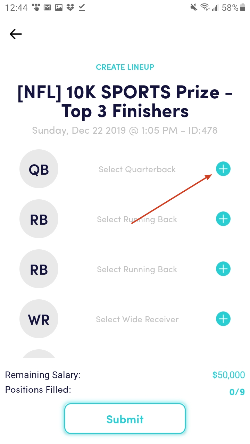 Once on the player selection screen, you will see a list of players available for that position, along with the details of that player. Choose which player you want to select for that position: 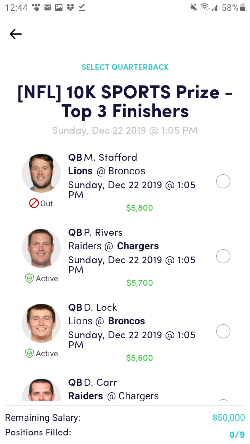 But not so fast. You can’t just select every top player in the league at that position. This is because each player is assigned a “salary” number based on their level of play and strength as a player. The better the player, the higher the salary.

Each contest by default has a total salary cap of $50,000, which means the total salaries of all the players that you add to your lineup can not exceed $50,000. Each player you add to your team will cost you that player’s salary. Once you’ve reached your salary cap, you won’t be able to add any more players: 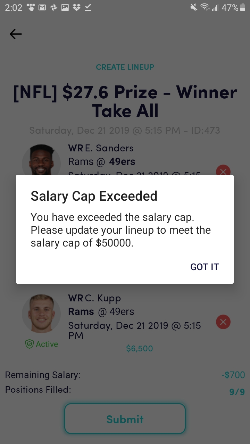 Yet, you can’t just stop at 6 or 7 or 8 players. You must add 9 players to your NFL lineup. Which means you can’t just load up on great players and then stop. You need to think strategically about which top players you really covet, and balance those out with lesser players that you think will over-achieve during that particular game. This is where the difficulty and strategy in Daily Fantasy Sports comes into play.

The Player Selection screen will show you a list of players for the position you tapped on. Each player is represented by a card that will include the following information: 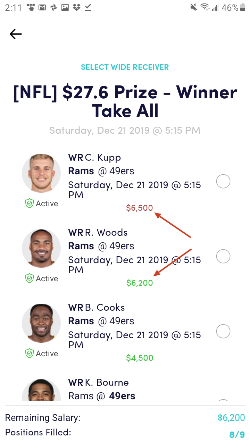 Once you have decided on a player, tap on the plus button on the player card and you will be taken back to the lineup screen with the player you just selected filling that position in your lineup. You will also see your salary cap reduced by the salary of the player: 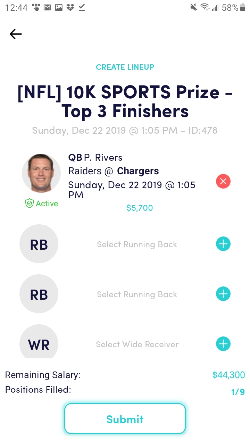 Repeat this process until all the positions have been filled.

If you want to update a position that has already been filled, you can tap on the “X” on the player card to remove that player, and tap the position again to select a new player: 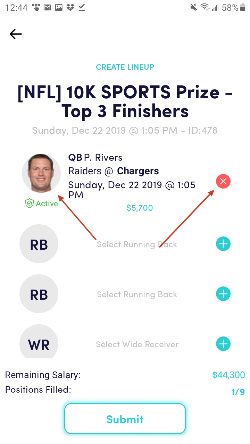 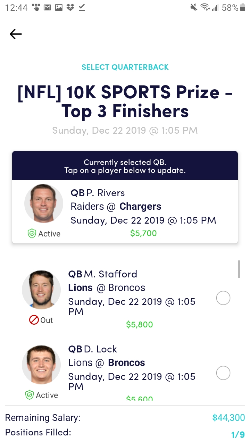 Once you have filled all positions and are within the salary cap, tap the “Create” button to save your lineup: 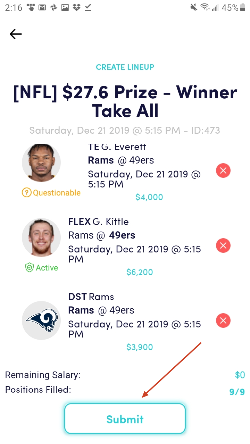 You can update your lineup at anytime, up until the beginning of the contest.